"I have a video from snapchat that I have difficulties playing (on the computer). It's a .mp4 and it plays perfectly on VLC and QuickTime - but not on anything else. I've tried downloading all sorts of codecs and stuff but i don’t get it to work. It doesn't work when uploaded to Youtube or Facebook for example."

Snapchat gives your life more fun. With the app, you can take picture, record videos to share with your families and friends online. The point here, more than one guys met issues when playing Snapchat videos in .mp4 when uploaded to YouTube Facebook, or somewhere else.

Based on our testing, the Snapchat .mp4 plays perfectly in VLC and QuickTime, but it’s difficult to share and play on YouTube, Facebook(It’s probably due to its multiple streams). Here we will offers you some possible methods to solve the issue.

Solution 2. If you have a Mac, it's possible to import Snapchat MP4 into iMovie, then reexport it. The resulting exported .mp4 will then be usable on YouTube (and we assume others).

The software is a video transcoding tool, equipped with a codec pack that contains various codecs, including mp4. The software is able to convert Snapchat MP4 to a standard .mp4 or other formats that fit YouTube or Facebook. It also allows to tweak video, audio parameters like video size, video codec, bitrate, frame rate, audio codec, sample rate, audio track.

1. Start Snapchat video converter and drag .mp4 files to the software interface to import the file. It support batch conversion. 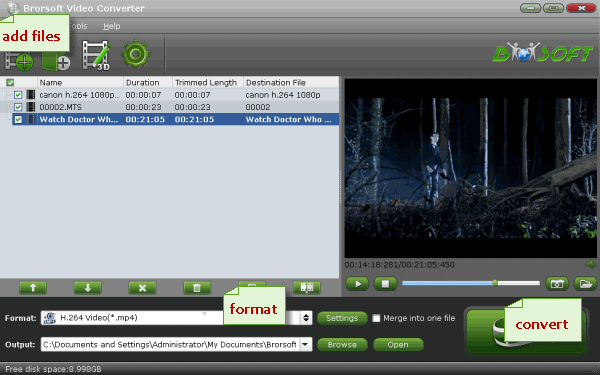 2. Set output video format as H.264 MP4 under Format > Common Video. In general, mp4 is a well-accepted file format for its ability to save memory storage and keep up the video quality.

3. Hit the Convert button; this video converter will start to convert Snapchat .mp4.

After the conversion is over, head to the destination folder where the converted files are stored, transfer the files to YouTube or Facebook. Enjoy.